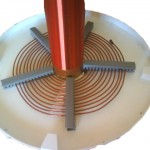 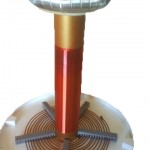 How did I make it: Firstly, I made the base out of a plastic Pepsi stand, then I started adding all the components to the base. I assembled the capacitor bank (group of connected capacitors) on a paper towel roll. I coiled some (a lot actually) of wire on a PVC pipe to make the secondary coil. I made the primary coil out of some thick copper wire, then a used some sort of plastic tubing (used for arranging wires) to hold the primary coil in place. I improvised the 'top load' or shiny metal thingy as I like to call it, out of an air-conditioning  duct (a very small one).

How powerful is it: According to calculation, it outputs a whopping 615000 volts, consuming 1 amp at 220 volts.

Videos of the Tesla coil in action: